It is unfortunate that the United States Securities and Exchange Commission has chosen to send a message to the crypto industry by extracting a huge $100 million settlement from the lending platform BlockFi in an administrative proceeding publicly announced on Feb. 14. It was quite a Valentine’s Day kiss — $50 million for the SEC and $50 million for some 32 states that piled on because they saw an easy target.

Powers On… is a monthly opinion column from Marc Powers, who spent much of his 40-year legal career working with complex securities-related cases in the United States after a stint with the SEC. He is now an adjunct professor at Florida International University College of Law, where he teaches a course on “Blockchain & the Law.”

Don’t misunderstand: I agree with the SEC that as a part of its lending activity, BlockFi likely offered products that could be characterized as “securities” under their definition in the Securities Act of 1933 in Section 2(11). Regular Cointelegraph readers may recall me talking about a similar lending program planned by Coinbase that would likely be a “security” given that the loaned assets were all pooled together for lending purposes. The legal analysis by the SEC takes a somewhat different approach, with the lending program presented as both an “investment contract” and “note” under Section 2(11). Thus, the fact that the SEC commenced an action for that federal securities law infraction does not surprise me. What is somewhat troubling, though, is both the size of the penalty and the assertion that BlockFi operated as an unregistered investment company under the Investment Company Act of 1940.

Indeed, I am not the only one disturbed by this. SEC Commissioner Hester Peirce publicly dissented by way of issuing a “Statement on Settlement with BlockFi Lending LLC” the same day the SEC proceeding commenced. In the statement, she asks:

“Is the approach we are taking with crypto lending the best way to protect crypto lending customers? I do not think it is, so I respectfully dissent.”

Bravo to Commissioner Peirce! For both her fearless boldness in advocating for a more reasoned regulatory approach to advancing the nascent crypto industry and for her being, at this time, the sole shining beacon the industry can count on to question the knee-jerk reactionaries in government — reactionaries that care little about whether they throw the proverbial baby out with the bathwater.

There was a time when “Crypto Mom” had at least one ally on the commission who, like her, sought to protect blockchain from over-regulation. Elad Roisman, a fellow Republican appointed by former President Donald Trump, joined Peirce in advocating for reasonable regulation for the industry. But he resigned from the SEC in January, having served for little more than three years as a commissioner. Peirce was nominated to the SEC by Trump and confirmed in January 2018, so she has one more year of her five-year term. Let’s all hope she is reappointed by President Joe Biden, as once she is gone from the SEC, the actions of Chair Gary Gensler will go unchecked, and we can expect many more efforts by him to, in the name of investor protection, impose disproportionate “telephone book” settlement numbers.

As I have previously written, Gensler is an aggressive government regulator, having demonstrated his tenacity in imposing regulation while at the Commodity Futures Trading Commission. His deep knowledge of blockchain and crypto, as demonstrated by having taught the subject at MIT, is both a blessing and a curse. While chair of the CFTC, he pushed through hundreds of rules and regulations to implement Dodd-Frank legislation, including regulating swaps transactions. He has spent the better part of the last 25 years in and out of the U.S. government, so he has political instincts. From his bio, it does not seem he has worked in the private sector since the mid-1990s.

“​​It [the settlement] further demonstrates the Commission’s willingness to work with crypto platforms to determine how they can come into compliance with those laws [the Securities Act and Investment Company Act].”

Really? I don’t believe or accept that for one minute. How is a $100 million penalty showing the SEC’s “willingness to work with crypto platforms”? It seems to me that this is quite a significant financial penalty.

While I am not privy to how this settlement came about, I doubt very much that BlockFi, if and when it approached the SEC to discuss its compliance efforts, thought that by voluntarily coming forward and cooperating it would be hit with a $100 million settlement! Moreover, most startups are not in a position to fork over that spare change, and I think this settlement may deter them from cooperating and self-reporting.

In this case, BlockFi allegedly offered and sold BlockFi Interest Accounts, or BIAs, through which investors could lend their crypto assets to the company in exchange for its agreement to provide variable monthly interest payments. According to the administrative “Order Instituting Cease-and-Desist Proceedings, Making Findings, and Imposing a Cease-and-Desist Order,” BlockFi generated the interest paid out to investors by deploying its assets in various ways, including loaning crypto assets to institutional and corporate borrowers, lending U.S. dollars to retail investors, and investing in equities and futures. As of December 2021, BlockFi and its affiliates held about $10.4 billion in BIA investor assets and had over 500,000 BIA investors, including almost 400,000 in the United States. 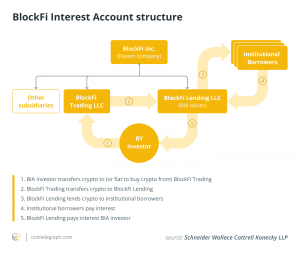 Maybe the SEC justifies this huge settlement amount because BlockFi consented to findings, without admitting or denying them, that it made materially false and misleading statements on its website concerning its collateral practices and, therefore, the risks associated with its lending activity. For this, the company is charged with violating the anti-fraud provisions of the Securities Act, Sections 17(a)(2) and 17(a)(3). Yet, as Peirce notes in her dissent:

“There is no allegation that BlockFi failed to pay its customers the money due them or failed to return the crypto lent to it.”

In other words, there was no financial harm to investors from the purported misstatements. Also, like me, she acknowledged that misrepresentations about over-collateralization are serious — it was less than 24% of the time, according to the order. But to the commissioner, “The combined $100 million penalty nevertheless seems disproportionate.”

One final point on the settlement, and the dissent, is noteworthy. The order states that BlockFi has agreed to seek to register as an investment company. (I will leave whether I agree with the SEC’s analysis that the BIA program made BlockFi an “investment company” for another day.) Yet, as Peirce aptly stated, registration “is often a months-long, iterative process,” and “When crypto is at issue, the timeframe is likely to be longer.” 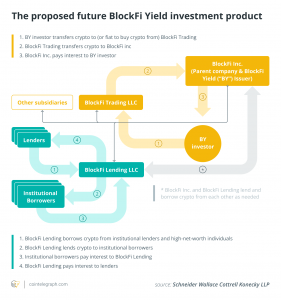 Until the registration is effective, BlockFi has agreed to stop offering lending products to U.S. citizens. Also, there are other obstacles the SEC could bring forward to deny registration, such as the fact that BlockFi cannot register as an investment company since it issues debt securities, so an exemption from registration will likely be required. I wonder if BlockFi or its counsel actually thought through a successful path to ever again offer BIAs to U.S. citizens before it settled.

According to Peirce, “The investor protection objective of today’s settlement will be poorly served if retail investors are ultimately shut out from participation in these products. Second, our process speaks volumes about our integrity as a regulator. Inviting people to come in and talk to us only to drag them through a difficult, lengthy, unproductive, and labyrinthine regulatory process casts the Commission in a bad light and thus makes us a less effective regulator. […] For the sake of the American public, our own reputation, and the companies that heed our call to come in and talk to us, we need to do better than we have so far at accommodating innovation.” Are you listening, Gensler?

Marc Powers is currently an adjunct professor at Florida International University College of Law, where he is teaching “Blockchain & the Law” and “Fintech Law.” He recently retired from practicing at an Am Law 100 law firm, where he built both its national securities litigation and regulatory enforcement practice team and its hedge fund industry practice. Marc started his legal career in the SEC’s Enforcement Division. During his 40 years in law, he was involved in representations including the Bernie Madoff Ponzi scheme, a recent presidential pardon and the Martha Stewart insider trading trial.

The opinions expressed are the author’s alone and do not necessarily reflect the views of Cointelegraph nor Florida International University College of Law or its affiliates. This article is for general information purposes and is not intended to be and should not be taken as legal or investment advice.